Most photographers, when they jump into the DSLR category, buy a kit. After a while they realize that changing the lenses gives them some advantages. Then they decide to buy better lenses, often the second hand ones. These lenses are cheap and ithere is a chance to buy "a pig in a poke". Even when we test it, it can stop working after some time, without any reason.

After two months of using great Minolta's lens which works fine, it just stoped. First unusual thing was when I made a picture with integrated flash, picture was over exposed. By closing an aperture it generated into a totally white picture. By opening the aperture on f/1.7 it gave a correct exposure. Just opposite that I expected. Checking with DOF button, I saw that aperture blades want to close. And a sound of auto focus motor shows a difficulty to move. The closest official service isn't close to my place, so I decided to do it myself.

After careful dismantling the lenses for auto focus are not so smooth. Old grease got dry and particles are all around and went into aperture blades and helicoids for auto focus movement. This requires a complete cleaning and lubrication. Lubrication of aluminum helicoids is hard-to-do, especially low speed with small gaps. Choosing the right lubicant is very important. A grease has too high friction, oil gives no protection of getting stuck. After a couple of different greases and oils, I found the right combination. Grease which protects it to get stuck is OKS-250, and oil for the smooth movement, used for aluminum sliders lubrication is Tufoil Compu-Lube. Detailed guidance for dismantling gave us Pete Ganzel, and I will skip this part. He shows how you can dismantle a lens from the front side to clean iris blades, but it requires a special tool, and I decided to clean it from the back side.

A lens is constructed as double-helicoidally. This means that we have two threads, one inside the other (2) which moves lenses ahead. Fine thread has a very small gap and lubrication is more demanding. For the right lubrication, we have to dismantle the whole helicoidal mechanism. And the result is two rings: 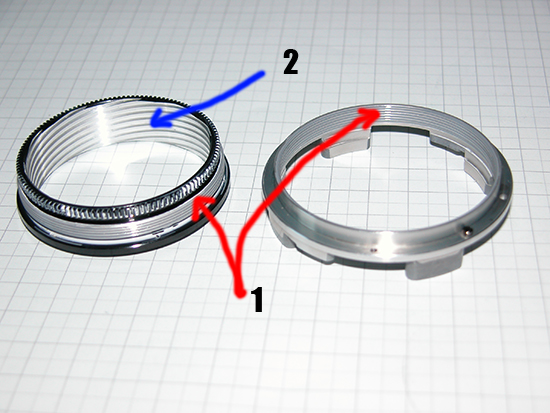 Lubrication should be made as follows. Put a few drops of grease around a thread. Smear the grease with a finger all around the thread. Wind/unwind it a couple of times to cover the thread completely and fill all gaps. The excess of grease should be removed with a cloth. After that, put two drops of oil at the beginning of the thread and wind (not to be tightened) a thread in. Add as many as needed to go very easily and smoothly. The excess of oil should be removed with a cloth, too. 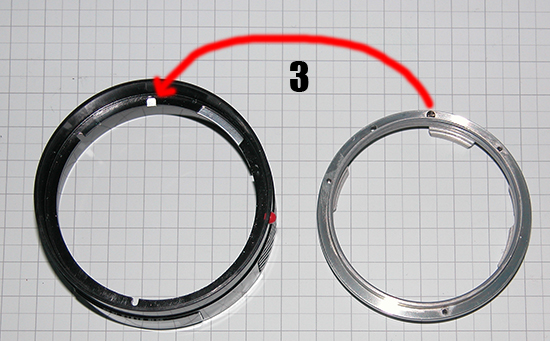 Only one screw is not a Phillips type and it's function is to be a marker for mounting (3). Outer ring should be fixed with six Phillips screws (4). 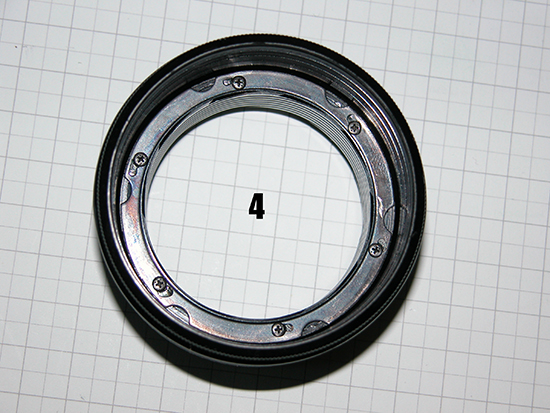 When you put together the rest of the parts, cleaning blades is a next step. Blades have to be completely dry for moving fast enough. The best thing for cleaning blades is pure alcohol. I was using a 96% industrial, but any pure alcohol from pharmacy would be good. For dismantling a front group of lenses you need a special tool, the easiest way to clean it is from the back side. Only extra care and technique is needed. Before you start cleaning, hands have to be clean because you can make blades more oily than they were. 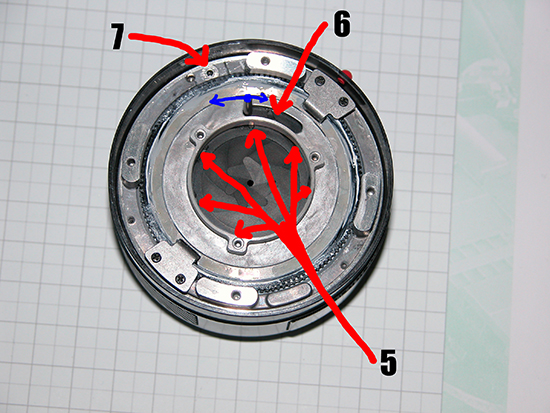 First, put a drop of alcohol on inner side (5) and by moving the stick (blue) spread it on the blades and at a same time wipe it with a cloth. You should put a drop of alcohol in the hole of the stick (6) because this is a place where the dirt comes in. You should clean it as long as a stick goes with blowing. After cleaning put some OKS-250 grease (no oil) in the hole where the connection of auto focus motor comes. On the tooth-gear you should smear the same grease in the area where it is used (a quarter of the circle). 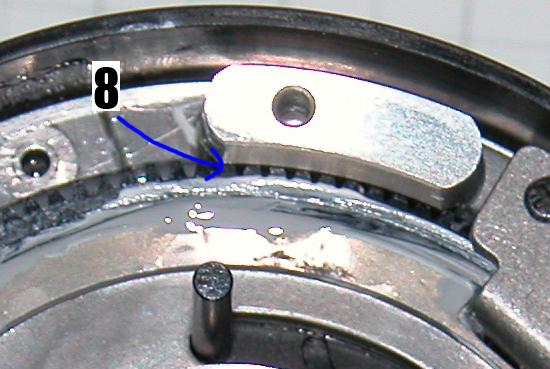 At infinity focus, a gap between limiter and gear is around 1mm (8). Inner helicoid (2) has no mark for the starting point, you should stipulate the right one. When the front group of lenses is on it's position, aperture stick in closed position has to be between the motor connection and the red mark. On this position it is in line with the leading sliders (9) and little less of 2mm over tooth-gear (10). 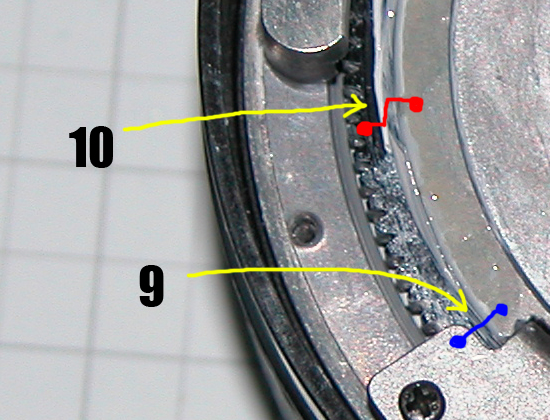 If we miss the right position, lens will work, but it wouldn't focus at infinity. At the same time, minimum distance will be shorter, around 25cm (correct is 45cm). 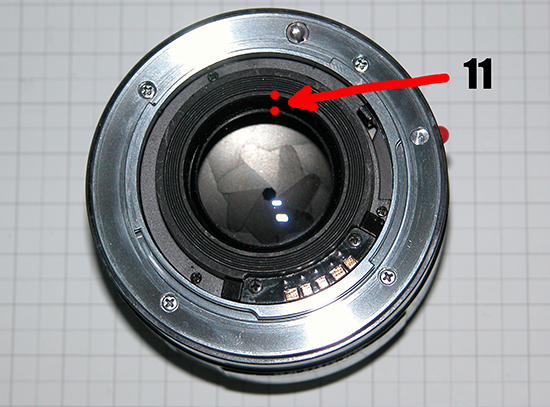 We will know this when we put a bayonet connection on it's place. If the size of the gap between rear lens and edge (11) is greater than 2mm, we miss. You have to dismantle it again and put a helikoid in, with half of the circle onwards.

Effective time for this type of servicing is around 2 hours and result is more than satisfying. Lens movement is faster and more silent. Auto focus motor is now lauder than lens. Accuracy is now better. Before servicing, focus was never reached on the first sight, it should be always corrected. Now, focus is reached without corrections. 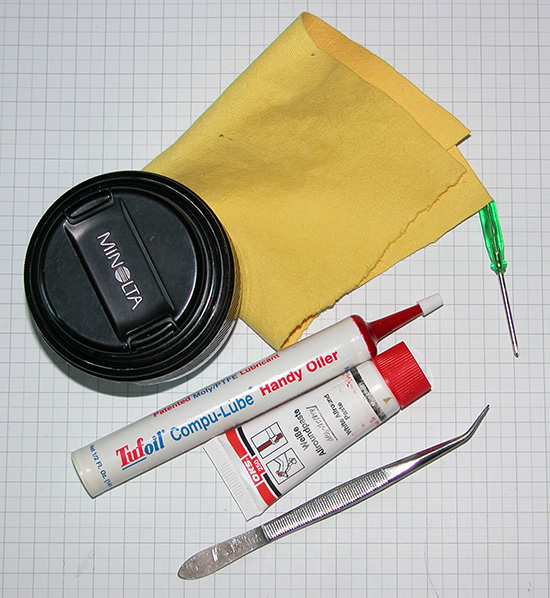 On this level of servicing, you need just a small Phillips screwdriver, small tweezers, lubricants and cloth which is hair free.