Dyxumites work together for the good of our community and the heritage of the best Minolta professional film body ever made.

This fascinating story of how some Dyxum members got together to ensure their Dynax 9 cameras could be used with the new CZ24-70 SSM lens was written by Jed Smith. Additional shots showing the stages of the modifications were taken by Conny1 (aka Rolf). 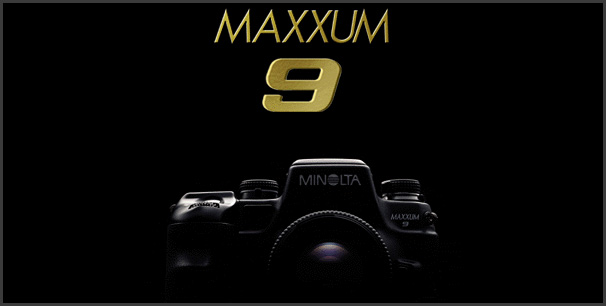 Shooting with a ‘9’ is perhaps one of the most enjoyable experiences a 35mm SLR photographer can have.  From its carbon-fiber shutter with a world class 1/12000th shutter speed and perfect sound to the smoothly sculpted grip with the VC-9M attached, few cameras rival this body for its combination of class, ruggedness, and performance.  No doubt it is heavy and somewhat large; but unlike its competitors, its high frame rate was achieved without an additional battery pack, and its 1/300th flash sync speed was unparalleled.  The large, bright viewfinder is a revelation to those accustomed to lesser cameras, and its weather sealing and all metal construction make the Maxxum 9 a body to endure the ages.  In short, Minolta developed the Ferrari of SLRs for the A-mount.  (See chart here for M. Hohner’s collected specifications.) 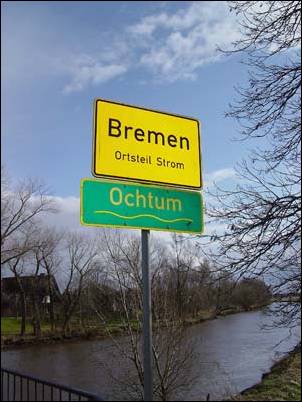 In the dark ages of 2000, just two years after the introduction of the Maxxum 9, when a quality DSLR was still a pipe-dream, Minolta introduced the Maxxum 7 with updated features such as SSM lens support and ADI flash integration.   Unfortunately, Minolta was not in the financial position to create, re-package, and market an updated 9 body or did not feel demand was high enough for a new professional body from Minolta.

Minolta did not completely let their faithful down, however, and offered an SSM/ADI upgrade to Maxxum 9 bodies free of charge to anyone who purchased a Minolta SSM lens.  The upgrade could also be purchased separately by any photographer as well.  To make these upgrades to the Maxxum 9, an extensive and highly technical procedure involving a new circuit board in the body and other software adjustments must be performed.

Fast forward to 2008.  The announcement of the CZ 24-70 f2.8 SSM lens set off a flurry of speculation in the A-mount circle.  This was our dream lens.  We’ve had the 28-70f2.8 G but this…was this the “G” lens of similar spec that Minolta hinted at, and we never saw?  Coupled with the 70-200 f2.8 SSM, this lens presented a potential problem for those of us who enjoy shooting film, our Maxxum 9 bodies aging gracefully in the field.  (See chart here for M. Hohner’s collected Minolta/Sony lens data.)

The adventure all began with a post on Dyxum – “SSM Lenses…What’s a Maxxum 9 user to do?” I asked.

The group began to respond…Alex (AlexKarasev), Kelly (AudioDoc), Michael Hohner (mhohner), Vitor, Dinostrich, Eclipse, Dynaxdude, and the rest of the great minds that make up the Dyxum forums.  Then the group mind began to take action…Immediately phone calls and emails began to circle the globe.  Could we still get this upgrade?  And if so, were there any Minolta technicians with enough skill left to perform such an operation on our beloved 9 bodies?  Japan, U.S.A., Canada, Portugal and others all ended in dead ends.  Brettania even called New Zealand for us!  At first it came back that the necessary parts no longer existed, and even if they did, those qualified to do this work were few and far between since Minolta shut down the NJ tech center.  Michael thought that the upgrade could still be done in Bremen, Germany for a price – the only caveat being no upgrades would be performed on cameras from outside Germany.

Word came back from Germany, confirming that Runtime did indeed have the parts, and a skillful technician to perform the procedures.  We were told that Runtime was in possession of only 8 upgrade boards, and having pursued every other possible line of Minolta/Sony technical service, hope for another source of parts was extinguished.  We knew no other service center had them.  Time was ticking away…who would be the last 8 photographers in the world to have their professional 9 bodies updated?*  There it was – the goal was right in front of us, but how could we get our cameras inside of Germany to be updated?  And who could we trust with our cameras or to front the funds to Runtime until we paid?

Enter Rolf (Conny1).  Every story has its hero – this story is ordinary in that sense.  As someone you just met from an Internet forum, a trust-worthy friend and photographer, Rolf is unordinary in that sense.  He sent separate PMs on Dyxum to all involved, offering to help with bringing our 9s into Germany and pain-stakingly guided the process along from the first email to the completion of our project.

It was decided that only one shipment could be made to Germany to avoid customs problems and multiple trips for Rolf.  (As fate would have it, we avoided neither of these ordeals, and Rolf spent a good deal of his time working for our 9s to enter Germany on time!)  Alex being the most meticulous of the three Americans was voted as the drop off terminal, and Kelly and I FedEx-ed our cameras to Alex, who received them with open arms and treated them like royal antiques.  Each camera was stripped of accessories (to avoid loss or damage), marked, wrapped, double wrapped and boxed, then the entire shipment was boxed again, insuring that no damage would be laid to the fault of us.  (There’s a few companies that could learn a few lessons on packaging from Alex!).  Before long, all three cameras were on their way to Germany via DHL. 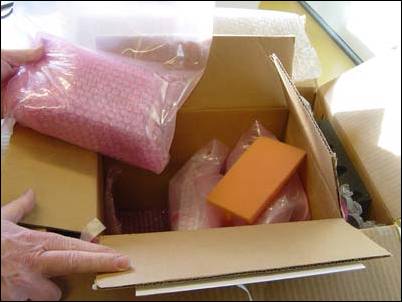 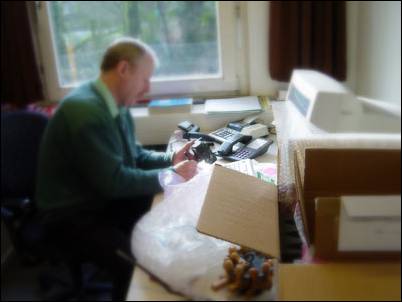 Meanwhile, Vitor had sent his Dynax 9 directly to Rolf, and that customs wait was a story in itself.  Somewhere along the line Rolf invited Vitor to join in on the email fun, and a Dynax 9 from Portugal was added to the lot of now five bodies in Germany waiting to be upgraded.

Nothing ever works as smoothly as planned, and customs in Germany was no exception.  There was a hold-up of our cameras, and Rolf being the tireless working man that he is, spent much time speaking to the right people, slipping them a $20 (just joking – but almost not), and in the end, hired a specialist in this department to assist us.  After two long drives to the depot and back, he was in possession of our cameras, and they were guarded by his Tiki dolls overnight (see photo) before being taken to Runtime. 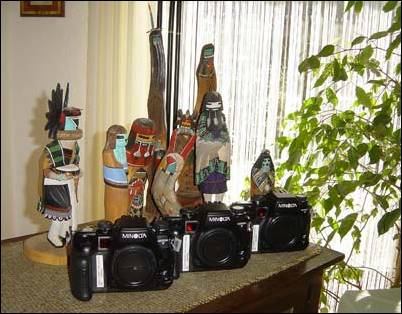 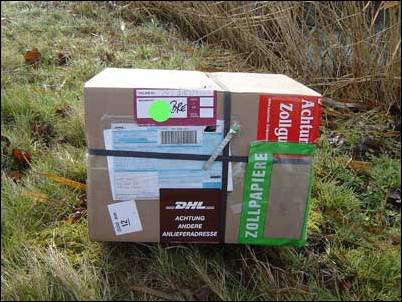 Once at Runtime, our cameras were handled with the utmost respect and care.  We were fortunate to have perhaps the world’s finest Minolta technician work on our cameras, and were provided with photos throughout the process, a few extra parts as needed, and the old cpu boards returned to us with our cameras.  To further illustrate Runtime's attention to detail, Vitor attests: "my camera had a discoloration on the sensor of the grip that was as new after the repair; they added a pc-sync socket cover and the top LCD window was repaired also.  (It had some small movement when minor pressure was applied.)  In the end all was well and I have an as New camera and quite happy."  When our cameras arrived, we each had a similar story to tell. 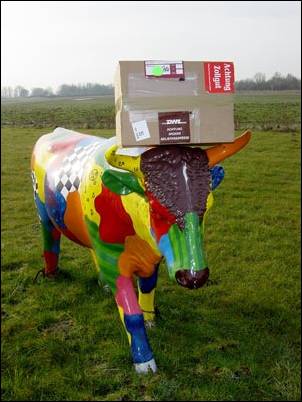 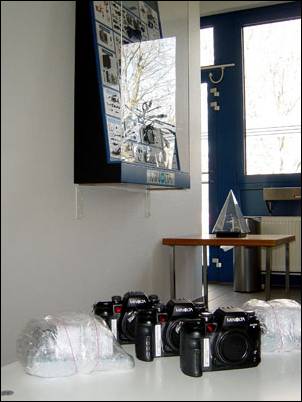 Full testing of all functions was done by Runtime, as well as by Rolf, who double confirmed that his Sony SSM lens worked on our Maxxum 9 bodies (see shot of his dog and SSM lens below).  He even went to the effort of shooting a roll of film through the body to test all settings before they left Germany.

After this process was completed for each camera, Rolf arranged for shipping of the cameras back to Alex on the East Coast, in the same meticulous packaging as before.  Tracking a package from Germany to the U.S.A. does not seem to be possible with the DHL system, so mild panic broke out among us for about a day and night when no data was available, but Rolf promised to deliver, and deliver he did.  Vitor's 9 had arrived in Portugal before this ordeal was complete, and he wrote the group by email singing the praises of Runtime and Rolf, which encouraged us greatly as we waited the arrival of our "black beauties".  All parts survived, and the package made it back to Alex safely at the end of March. 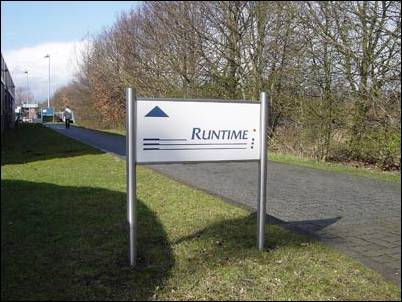 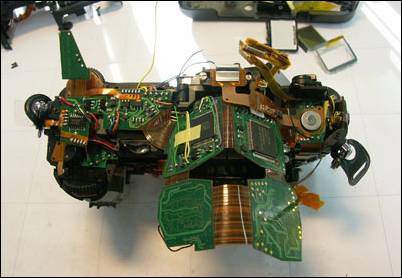 Not to be outdone in the service department, Kelly, who informs us that he is married to a German, had a house full of Germans the day Rolf called our loan due in full.  Alex, myself and Kelly emailed back and forth, grumbled about the exchange rate (as all Americans do), and in the end, it was decided that Alex and I would PayPal money to Kelly, who would send cash money with his brother-in-law, who would in turn exchange it into Euros in Germany, and deposit in Rolf’s account!  In the end, this netted us a decent exchange rate for the least amount of hassle.  Rolf actually had the money in hand a day before Alex had the cameras back in the living room.  From there, Alex repackaged Kelly’s and my Maxxum 9s into their original packaging, and DHL had them arriving at our doorstep shortly thereafter, along with some special film from Alex, and German chocolate from Rolf! 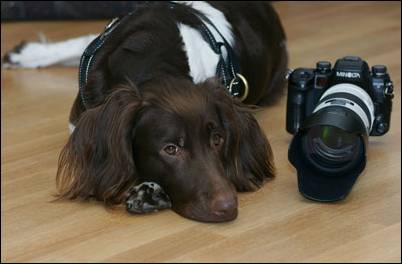 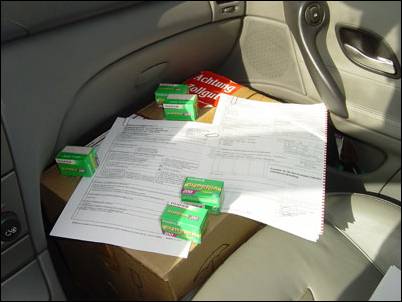 And me…well, I honestly didn’t do a whole lot.  Sure, the post on Dyxum was the catalyst - the entire process from initial thought to completion took from the 1st of February to the 3rd of April.  I now have some great friends here on Dyxum and throughout the world.  But in the end, I guess I was the one that just paid my money, waited…and now I have here in my hand perhaps one of the last Maxxum 9 bodies to ever be upgraded to full professional status. 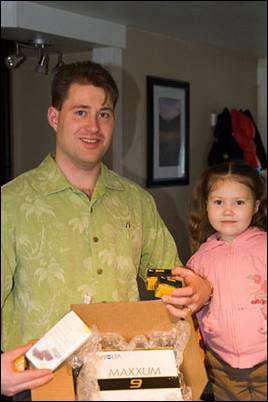 Opening my box from Germany at last – Katrianna is helping!

*Rolf and Kelly have since determined there is a Sony part # for this Maxxum 9 SSM/ADI upgrade board. However, the group is still trying to determine whether or not the part is available.  To any who are interested in this procedure…we will keep you posted.

There are some additional shots here which were taken by Conny1 (Rolf) during the updating process.