Under the motto “more is better”, today's digital camera manufacturers are engaged in a race to get the highest number of megapixels in a CCD-chip. There are more and more camera-models available that can capture a resolution of up to 8 megapixels.

But to be able to maintain the extremely compact design, it is necessary to increase the number of pixels on a chip, while the size of the chip has to remain constant. But to place more pixels in the same area means, inevitably, that the area of each pixel has to decrease accordingly. Consequently, the amount of light that can fall on a single pixel is more limited and the signal has to be enhanced incrementally. 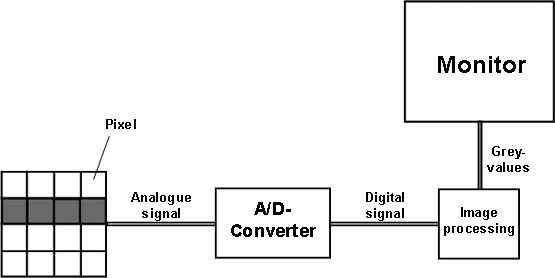 Generation of a digital image

Enhancing the signal unfortunately yields not only an amplification of the desired image-information, but also leads to an increase in interference within the camera; in other words, an “error” is introduced into the picture.

The technical terminology for this error is “noise”, and it is a very important factor in terms of image quality.

This shows us that the mere number of megapixels should not be the crucial factor when choosing a digital camera, but rather the ratio of the number of pixels to the amount of noise the camera produces. What good is an extremely high resolution for the most minute details when those details can not be distinguished because of the noise?

"Charge-Coupled Device" - the heart of a digital camera

To properly understand noise and how it comes into existence it is necessary to understand the way a CCD-chip in a digital camera works.

The CCD-chip is the part of the camera that is responsible for capturing and translating the light-signals. CCD is an acronym for “Charge-Coupled Device” – and is the heart of a digital camera.

A CCD-chip is composed of a rectangular grid with a great number of light-sensitive sensors known as pixels (pixel is an abbreviation for "picture element"). 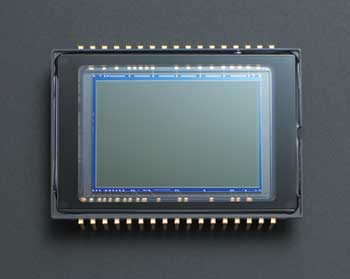 The CCD-Chip of a Dynax 7D – the "heart" of a digital camera. The CCD-Chip is equipped with light-sensitive sensors.

After the data is read from the CCD-chip, the signal is enhanced. The enhanced currents represent analogue signals. The processor of the camera, however, needs digital input to produce and store a picture. The transformation of the analogue currents into digital values is done by a so-called A/D-converter (analogue/digital-converter). Here a certain amount of voltage represents a digital value. The processor than relates a certain value of grey to the digital values. Thus finally an image is generated.

Noise can be classified into two catogeries

The resulting noise can be distinguished on the picture as an unwanted signal - ie one that doesn't carry image information - on the picture. The noise-signal adds to the desired light-signal and is expressed in the image as a structure that was not contained in the subject photographed. Noise can be classified into two catogeries.

The first contains static noise, which is time-independent and not constant. Some types of static noise are:

In the second category, is pattern noise.

A noise pattern is called a pattern of noise that is identical from picture to picture. Here it is designated between:

Every photographed object reflects light, that falls into the camera. But the incidence of light is not uniform and not constant, but rather random. This random incidence of light generates the so-called photo shot noise. Different amounts of light fall on the single pixels when the CCD is exposed. In addition, there is a minimum amount of light necessary to obtain a voltage that can be measured. Light with an energy less than 1.3EV is not recorded by the CCD at all; no voltage is generated, just as if there was no light.

Readout noise, as the name implies, occurs when the CCD-chip is read out, because the flow of electrons that are read out is not constant. This kind of noise is generated when the amplifier is not able to sufficiently measure how many electrons originate from which pixel. The faster the chip is read out, the higher the resulting error and thus the resulting readout noise.

Every CCD-chip generates a “thermic noise”. This means, that electrons are generated in the pixel without the influence of light, but rather because of warmth. This effect is amplified with increasing temperature of the CCD-chip. An increase in temperature of 7 degrees results in a doubling of the dark current noise.

Therefore, in astronomy sophisticated cooling-systems are used to reduce the movement of the atoms and thus reduce the dark current noise. Otherwise it wouldn't be certain that a recorded object is a newly discovered star and not just noise.

The conversion of the analogue signal into a digital signal is done by an a/d-converter. It separates changes in voltage into discrete gradations.

The quantization error thus decides, how many levels of brightness of the object can be differentiated by the camera.

Quantization noise is the statistical uncertainty that arises in the conversion of the analogue differences in voltage into a digital signal. This type of noise is nonetheless normally negligible, because CCD-chips often already generate a background noise higher than the quantization error.

After the read-out, the CCD-chip performs a reset, that means the read-out diode is charged to its reference level. But very small amounts of current always remain in the single pixels, the exact voltage is not known. These residual charges are responsible for the reset noise.

If a picture is now taken and the signal is read-out, it is not clear which part of the signal represents the light and which part was already there. This effect is inversely proportional to the intensity of the image signal.

Fixed pattern noise is due to irregularities in the CCD, like for example minute differences in the distance between pixels, and differences in size and sensitivity. In practice, this phenomenon expresses itself in a pattern that remains constant in every exposure. 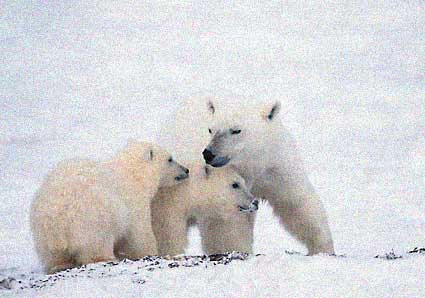 A family of polar-bears with fixed pattern noise

Fixed pattern noise can be very effectively erased in the camera with help of advanced algorithms. This is done using a reference-exposure. Since the pattern is constant in every exposure, it can easily be subtracted from the image information. 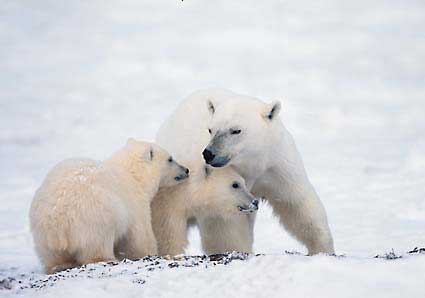 The fixed pattern noise was subtracted from the image.