This section will deal with a photographic phenomenon called depth of field and its application when composing an image; for instance, when you need to separate an object from the background in order to attract and direct the eye of the beholder.

The aperture not only controls the amount of light hitting the film or CCD sensor; it also influences the depth of field. In physical terms a perfect, or critical, focus can only be achieved for only one plane in front of the camera and every object in this plane will be sharp. But in practice there will be an area in front and behind this plane that will appear sharp. 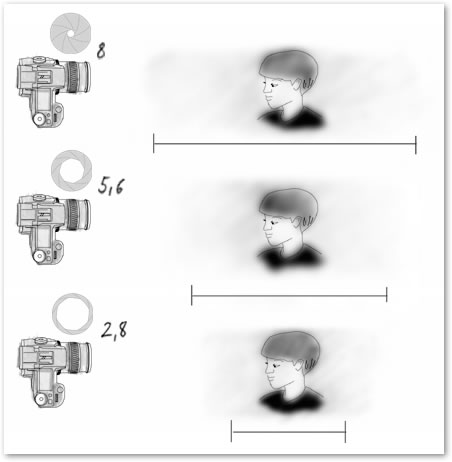 The aperture determines the area in front and behind the subject, which is acceptably sharp.

The following example should illustrate the effect the aperture has upon the depth of field. You are about to photograph a friend who happens to be standing in front of a forest. Focus on your friend until he is completely sharp and choose a small f-stop number (large aperture), e.g. f/2.8, before shooting. When you view the results you’ll find that your friend is absolutely sharp where as the forest looks blurred. The forest is outside the limits of the depth of field.

These settings enabled you to separate the main subject, your friend, from the background. This simple trick will consequently direct the eye of the viewer straight at him without being aware of it. Now, if you want to include the forest as an image composition element because it’s a one in a lifetime situation the only thing you have to do is stop down the lens. This is photographic jargon for choosing a smaller aperture (increasing the f-stop number), e.g. f/8. A smaller aperture will augment the depth of field and the forest will seam absolutely sharp.

This is a pictorial representation of the effect of aperture on an image: On the left a small aperture was chosen (Large number eg f/16), and therefore nearly the whole image is in focus. On the other image the choice of a large aperture (small number eg f/2.8) leaves only the number plate sharply focused.