Image formation with a lens

The type and quality of a camera's lens has a major impact on the creation of an image. In this chapter you will discover how a lens works and how to influence the picture quality by using its different components.

The structure of a compound lens

The principles of image formation.

A compound lens, as used in practically every camera, consists of a number of different pieces of glass or plastic, each one being a single lens element, cemented together. The main task of a camera lens is to focus the light reflected from an object in order to produce a sharp image of the object on the film or CCD plane. Glass lenses can gather a greater amount of light than plastic producing an image with shorter exposure times.

Strictly speaking, a lens can only achieve a perfectly sharp image (perfect focus) for only one plane in front of the camera at a given distance. If the distance between film plane and subject plane changes a refocusing needs to take place. This is usually accomplished in manual focus lenses by rotating a ring on the lens barrel, the lens’s focussing device, which moves the different lens components inside the camera (compound) lens until the image is correctly focused.

The lenses inside a compound lens 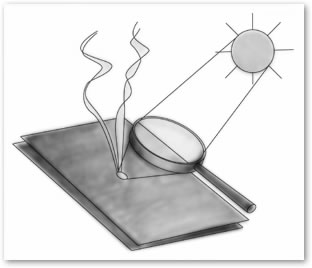 The individual glass elements inside a compound lens, like a magnifying glass, have curved surfaces.

The curved surfaces are classified into two categories:

Convex lenses have a spherical surface that bulges outward at the centre. Light beams, which pass through a convex lens are refracted (their path is altered) and the beams of light converge. In theory a single convex lens could be used as a camera lens, but this is not done due to its imaging imperfections. These imperfections, or aberrations, will be explained later.

Concave lenses have a spherical surface that is hollow, i.e. thinner at the centre than at the edges. Light beams passing through a concave lens are refracted so that they diverge. A single concave lens cannot produce a real image. Nonetheless, concave lenses can be quite useful, as we’ll soon find out.